Sainsbury’s & Asda merger: A deeper analysis into the deal

The UK grocery market is dominated by the big four brands: Tesco, Asda, Sainsbury’s and Morrisons. However, their market share is under jeopardy due to tough competition from online-only and discount brands such as Aldi and Lidl. The big operators’ profit margins have roughly halved to between 2% and 3% under the strain—even in the lead up to Christmas, the sector saw the slowest growth for nine months.

Uncertainty with Brexit and little growth in their own aisles, the chains have been searching for new sources of revenue. The announcement came in April 2018 of the potential merger between Sainsbury’s and Asda, creating hype on what could be the biggest shake-up in grocery retail for the UK since Morrison’s acquisition of Safeway in 2004. The pressing question is: how will this duopoly impact the grocery ecosystem? 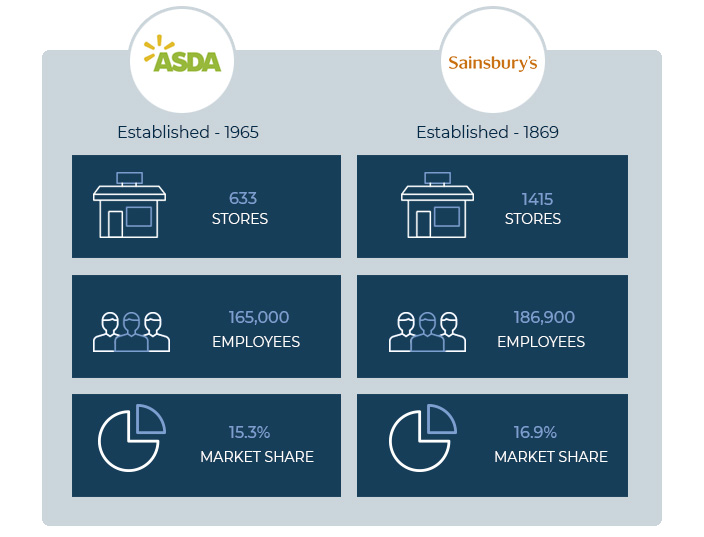 The chains make a number of statements in the Proposed Sainsbury’s and Asda merger corporate document, detailing what the merger would deliver for both the industry and its customers. This new deal has been branded as the “dynamic new player” in the UK retail marketplace. However, customers will still recognise the iconic brandings of each entity, which will remain for both chains due to the long-established brand loyalty.

With the perceived quality of both Lidl and Aldi products on the rise, Sainsbury’s and Asda want to fight back. Matching both market demand and aligning products with consumer purchasing behaviour is one thing, but improving quality, service and range while keeping prices low is another battle in itself. Driving cost savings and economies of scale across a number of business operations can help drive cost reductions at the bottom line for the consumer. For example, improving the leasehold freehold mix and capitalising on transporting large volumes in shared trips destined for Asda and Sainsbury’s establishments would vastly reduce overhead costs.

“We are committed to reducing prices on everyday items by around 10%”, excerpt from Sainsbury’s report

Together, the firms will put forth greater investment in technology with aims to offer better service, delivery and in-store customer experience implemented at a much faster pace to compete with the likes of Amazon, who are launching their cashier-less “Amazon Go” stores.

This merger could leverage more favourable buying terms across suppliers for both Asda and Sainsbury’s, who currently pay large suppliers different prices for identical products. This harmonised purchasing power leads directly to lower costs for both companies and the end consumer. However, this strong claim has also raised skepticism from industry watchdogs.

The Competition and Markets Authority (CMA) launched an investigation to understand what the impact of the merger would be in terms of competition for the sector and also its effects on customers. Through careful analysis, it was concluded that the move could—in contrast to the companies’ claims—lead to higher prices and reduce quality in-store and online. This is not the first time the CMA has stopped a supermarket merger. In 2003, the potential takeover of Safeway by either Asda or Sainsbury’s was blocked due to the potential impact on national market share. The proposed acquisition was permitted for Morrisons, who held a lower market share. Looking deeper into the competition objection (as flagged by the CMA in this scenario), the two prominent themes where serious suspicions have been raised are twofold:

Let’s deep dive into both of these ideas to try and get a wholesome perspective on what the Sainsbury’s and Asda merger means for grocery retail.

The effect increased market share has on consumer choice

There are concerns over how this will affect the grocery ecosystem, as the merger would result in the brands holding a 30% market share. How would this level of control impact the end user and suppliers? The brands stated that they could leverage their buying power and ultimately lower costs for consumers. However, the CMA feels the control they would have over suppliers could have an adverse effect on shoppers who could experience higher prices for items at other retail grocery stores. This would occur as a result of the suppliers having to offset the prices when selling to the competition to make up for their losses when negotiating with Asda and Sainsbury’s. The CMA also believes the deal could lead to inflated fuel costs at more than 100 locations where Sainsbury’s and Asda petrol stations overlap.

With strong objections at an early stage of the consultation, the CMA has stated that the two grocers would need to sell at least 300 stores to a single buyer in order to get their green light, and added that it would be “difficult for the companies to address the concerns it had identified”.

In order to comply or even contest the claims brought forth by the CMA, both Sainsbury’s and Asda are going to have to perform an in-depth analysis of their retail networks to defend their position. However, time and tools are of the essence. Given the volume of stores in the networks and the types of data needed to garner the insight necessary to combat the challenges presented by the CMA, could the answer for these heritage grocery giants lie in Location Intelligence? The term Location Intelligence refers to the collection and analysis of many sources of geospatial data that are transformed into strategic insights to solve a variety of business challenges. In the case of Sainsbury’s and Asda, this challenge is critical, as it will define the future of these brands.

The true market context around Sainsbury’s and Asda stores

The task of calculating competition issues in a complex and ever-evolving market across countless categories is a difficult process for a governing body like the CMA. This could be the reason as to why the CMA came to the conclusions they have in terms of the number of stores Sainsbury’s and Asda would have to sell in order for them to consider the merger fair and give their approval. Nevertheless, when we used Location Intelligence to analyse the catchment areas around different Sainsbury’s and Asda stores, our data tells a slightly different story.

As previously stated, the CMA has expressed the chains would need to sell over 300 stores. Criticism of the results shown in the primary analysis by the CMA revealed that—when evaluating where store overlapping occurred—the primary analysis only focused on the two chains’ medium and large-sized stores and those of their four traditional rivals. The first phase of the CMA’s market research analysis also did not take the proximity of Aldi and Lidl stores (known competitors) into account when analysing the catchment areas to determine whether there would be a fair level of competition after the merger. This could be due to the fact that Aldi and Lidl stores are generally under 1,400 square metres in size. However, although Sainsbury’s and Asda supermarkets tend to take up more square footage than Aldi and Lidl, this does not negate the fact that competition is present in the areas. Since the first criticism rang out in regards to their lack of transparency, the CMA has since said that will consider the impact of Lidl and Aldi stores nearby.

Even after the CMA vowed to rectify the gaps missing from their first analysis, the CMA has additionally failed to consider the known delivery services and recipe box operators—such as HelloFresh or Deliveroo—within those same catchment areas. While they are not necessarily direct competitors, they still do take a significant piece out of the Food and Beverage market share pie. In essence, the picture painted by the CMA draws a rather skewed portrait about who is present and competing for consumer mind share around Sainsbury’s and Asda stores.

As of today, the two chains have proposed to sell at least 150 stores to help sweeten the negotiations with the CMA. Nevertheless, the findings revealed in our analysis beg the question: is this the right decision?

The image below shows the true market dynamics taking place within the Sainsbury’s and Asda catchment areas. A total of 292 Sainsbury’s and Asda locations do indeed have a Lidl, Aldi or Morrisons within the perimeter. In fact, these grocery markets are only a 5-minute drive away from Sainsbury’s or Asda stores. It appears that there is more competition than initially presented by the CMA.

Take a look at all the Sainsbury’s and Asda catchment areas that contain an Aldi, Lidl or Morrisons nearby across the UK

The future of the merger lies in the data

If the CMA had considered the proximity of Lidl, Aldi or Morrisons grocery stores before releasing the results of their first analysis, it would have been impossible for them to come to conclusions that they did. Stating that Sainsbury’s and Asda should sell 300 of their grocery stores in order for the merger to be considered reasonable no longer makes sense with this new and compelling evidence brought forth through deeper and more objective analysis.

The data obtained through Location Intelligence clearly shows that there is no need to sell 300 stores (nor 150 either).

In fact, only 60 Sainsbury’s and Asda catchment areas stand uncontested in the market by a lack of competition.

Within the proximity of those 60 stores lies a population of 1.86 million people earning an average of 30k GBP per year who could possibly be negatively affected by this merger, considering the two arguments presented by the CMA. This means that the CMA has suggested Sainsbury’s and Asda sell 240 more grocery stores than they really should based on this analysis.

Given the magnitude of this merger, it is essential for all parties to take into account the bigger picture as to what is really happening in the UK grocery market. Each store is its own universe—and should be treated as such to promote transparent results that are representative of the situation at hand. After carefully following and reviewing the arguments both for and against this deal, one thing is clear: the need for the right tools used to obtain accurate results is blatantly apparent. While the final decision has been extended several times as new evidence is presented, it appears that both companies will have their resolution at the end of April. Be it positive or negative, the answer should come from the data. Only then will it be objective. 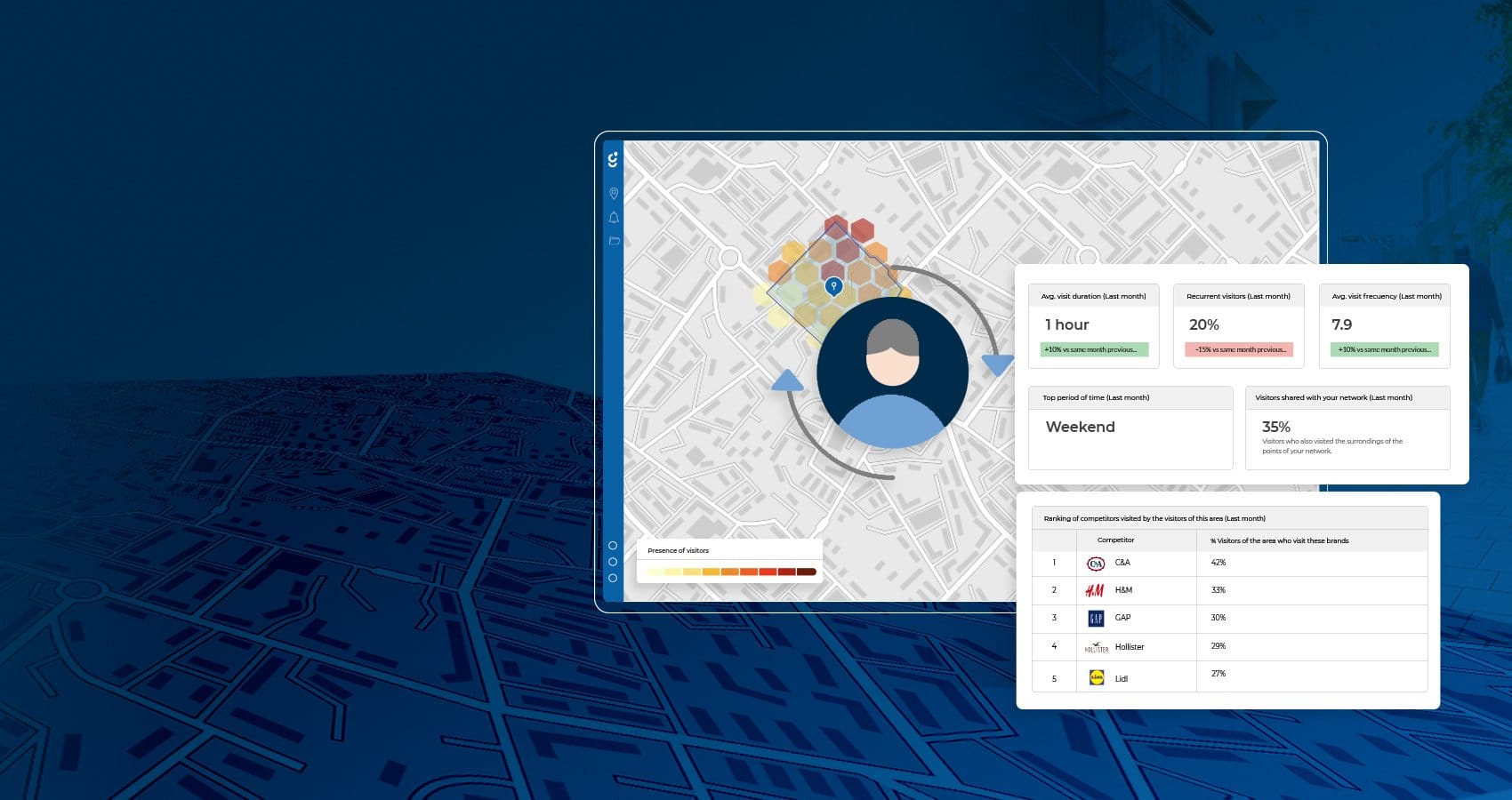 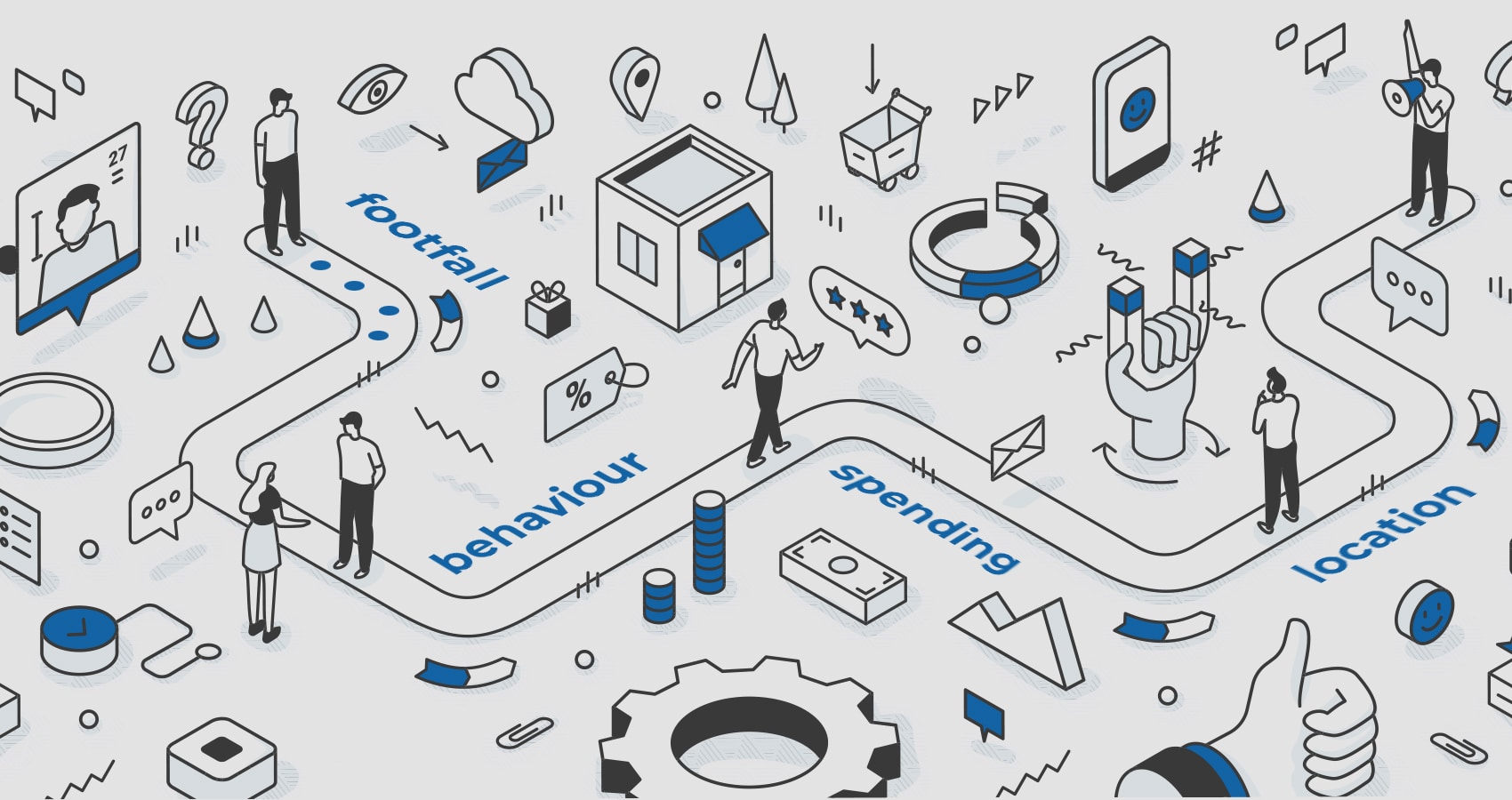 Retail Dynamic customer profiles that evolve as your customers evolve 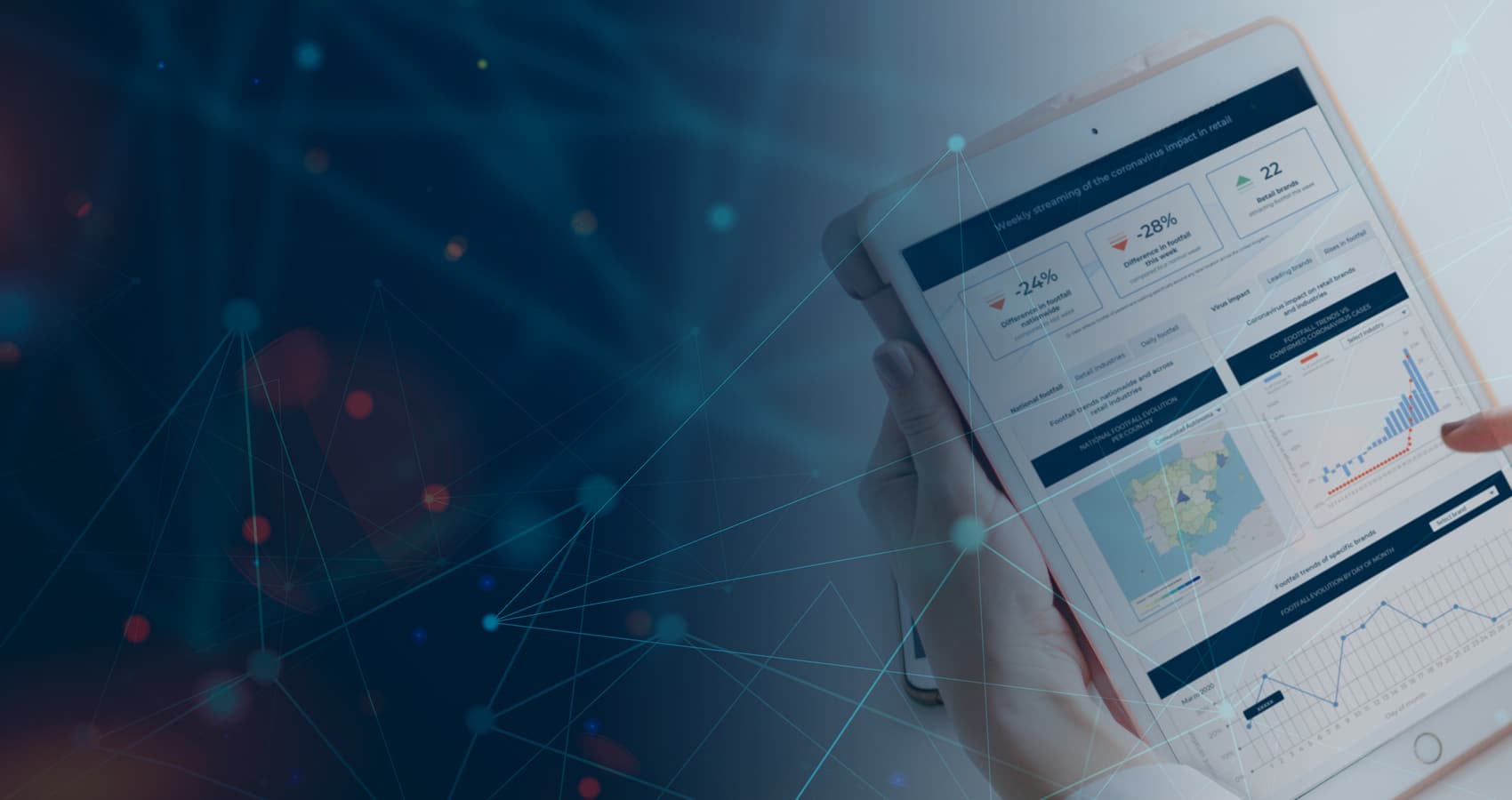 Retail State of the Retail Ecosystem 2020: Impact of COVID-19